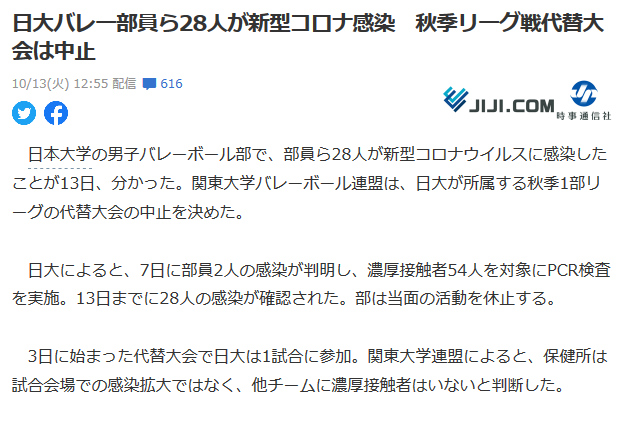 On October 13, according to Japanese media reports, 28 members of the men's volleyball department of Nihon University were infected with new coronary pneumonia. The Kanto University Volleyball League has decided to suspend the competition of a college autumn league game of the University of Japan.

According to Nihon University, two members were found to be infected on the 7th, and 54 close contacts were inspected. As of the 13th, 28 people were confirmed to be infected. Japan University Men’s Volleyball Team ceased current activities.

In the game that started on the 3rd, Ridai participated in a game. According to the Kanto University Alliance, the local health department stated that the infection has not expanded, and other teams have no close contacts.

University League opened on October 3, divided into men's volleyball and women's volleyball. Men's Volleyball Team 1 has played 10 games and was suspended on the fourth match day on the 11th. All four matches were suspended or postponed. When will the make-up match be notified separately.

After two weeks of quarantine and observation, confirm the health status of the contestants from each university and then make arrangements for the event to prepare for the University Student Championship to be held in Tokyo from November 30th to December 6th.